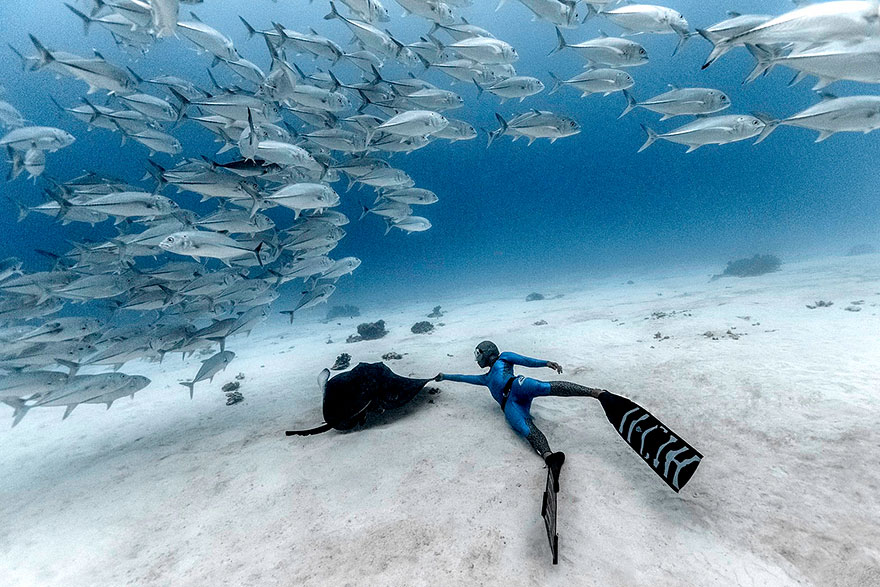 Nature, plants, animals and humans… we are all friends, one family of life, living on the Earth together.

Forests, villages, rivers and the ocean…everything is invisibly connected.

As they live as members of the natural world, so must we.

“Co-Exist,” a short film by Ai Futaki, will be shown in the Planetarium. The movie will be shown prior to each regular program six times per day during the event period.

Born in Japan, double Freediving Guinness World Record-holder Ai Futaki is a subaquatic messenger—one of the very few people in the world who conveys the splendors of the sea to us in various ways that include subaquatic art video and photography, TV, conference presentations and instruction in freediving. Using solely her own lungs, she dives beneath the sea like a marine mammal to bond with them and join their ranks, capturing those moments on film in their natural splendor sometimes with her as the object and other times with her as the photographer. Her works depict this connection as she describes it: “We are a part of nature. We co-exist alongside it.”

Ai is truly part of the underwater world. By representing the aquatic realm in a way that the world has never seen, she highlights the meaning and expression of the connection between mankind and water. She is the bridge; she is the messenger from the sea.

Ai’s credits include speaking at TEDxTokyo conferences and winning the Gold Award at the World Media Festival in 2012 for the eponymous episode of the TV documentary program “Jonetsu Tairiku,” and her special program “Precious Blue” on the NHK network has become a series. In recent years, she has been active on the international scene as well, including collaborations with ISSEY MIYAKE and global photographers. In 2019, she held a personal exhibition in Madrid, Spain entitled “Naka-Ima: Here and Now.”

Australian photographer Darren Jew has captured the planet’s breathtaking landscapes and wildlife from Antarctica to Zambia over a 40-year career.

Soon after completing his studies at Queensland College of Art in the early 1980s, his skills found harmony with his profound love of and passion for nature, enabling him to share with others his unique vision of the world. His works are now published widely in books, magazines and photography collections, and he also engages in photographic seminars and wildlife photography tours.

Darren was acknowledged as a Canon Master in 2007 and is featured in the Netflix series “Tales by Light” that follows a select number of the world’s best photographers. His photographs have earned him the accolade of Australian Professional Nature Photographer of the Year six times between 2007 and 2018. 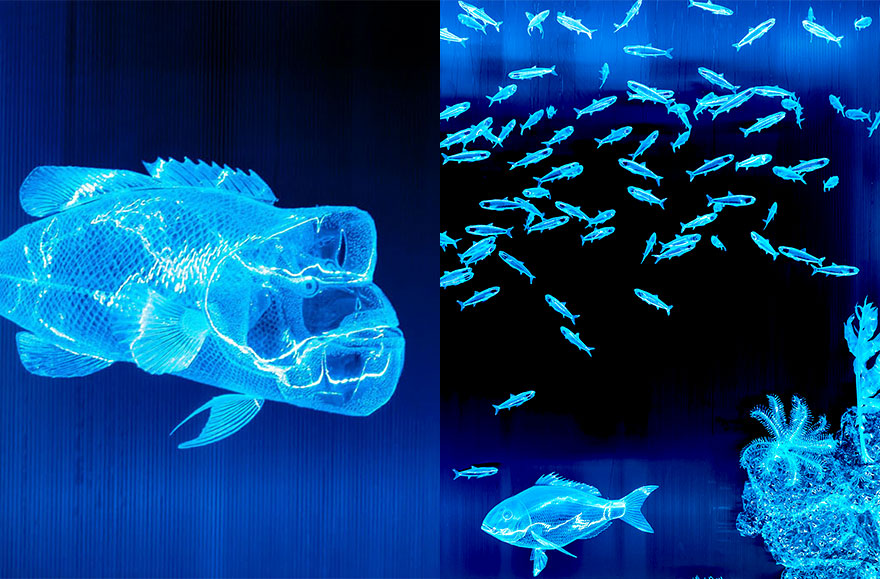 …by recycling them and granting them
a new life in the form of art.

The theme of this exhibition:
The artistry to be found in eco-activities.

Used, empty PET bottles are part of our daily existence. Although recognition of those bottles as recycled resources is now entrenched, once they are thrown away, they are effectively referred to as “trash.” The rebirth of those PET bottles as “art” that moves the people who see them is sure to help reshape how they think about the earth’s resources.

All of the works on display were created by hand without the use of any adhesives or paints to impart those resources with new value and give them a new life. I believe those elements are what define “PET bottle sophisticated art,” and that they serve to further enhance the charm of these works.

Completed undergraduate and graduate programs at the Joshibi University of Art and Design. Subsequently began creation of PET bottle sophisticated art in 2006. Engaged in steady creative activities that included exhibitions of works in public facilities (art, science and other museums) and the creation of works to assist with the reconstruction of the Tohoku region following the Great East Japan Earthquake. Has simultaneously exhibited a considerable number of large works at various locations in large commercial facilities such as hotels and train stations and in amusement facilities. Has won numerous accolades that include an Honorable Mention at the Japan Hobby Awards in 2012 and was accepted for the Eco-Art category in 2014’s Eco Japan Cup. Her realistic, life-sized works based on biological aspects appeal to everyone who lays eyes on them. Currently has permanent exhibitions at multiple facilities that include the Numazu Deep Sea Aquarium, the Sunshine City Aquarium in Ikebukuro, Tokyo, the Lake Biwa Museum in Shiga, and the Hita City Museum in Oita.

This talk session will cover the wonder of the sea and the memory of life, posing the questions of where mankind came from and where it is going. Ai and Daisuke both perceive humans as another part of our planet, and continue to release works illustrating that. We will ask them about a world of sensibilities that transcend speech as well as sight.

Born in Saitama. Made his manga debut in Weekly Afternoon in 1993. Won the Award of Excellence in the Manga Category of the 2004 Japan Media Arts Festival for “Witches.” Received the Excellence Prize in both the 38th Japan Cartoonists Association Award and the Manga Category of the 13th Japan Media Arts Festival for “Children of the Sea,” which was adapted for an anime film produced by Studio 4℃, directed by Ayumu Watanabe and released in 2019. His work “Little Forest,” which depicted a girl living off the land, was also adapted for a live-action film once in Japan for a 2014 release (directed by Junichi Mori and starring Ai Hashimoto) and again in South Korea for a 2018 release (directed by Yim Soon-rye and starring Kim Tae-ri). Other works include “Saru,” “The Adventures of Kabocha” and “Designs.” Has also released the following children’s books: “I Can Hear the Mermaid’s Song,” “Bus-Saurus,” “Living with a Horse” (written by Yoshihiko Sumikawa) and “Heikuro Magaki: The Stone Steps to Success” (written by Hiroshi Ishizaki and supervised by Bakuzan Kanda). His illustrations have been featured in the likes of “Robert the Cat Pediatrician” (written by Kaeko Kiji) and in the “Children of the Sea”-themed artbook “Soul of the Sea.” Has also illustrated numerous book covers.